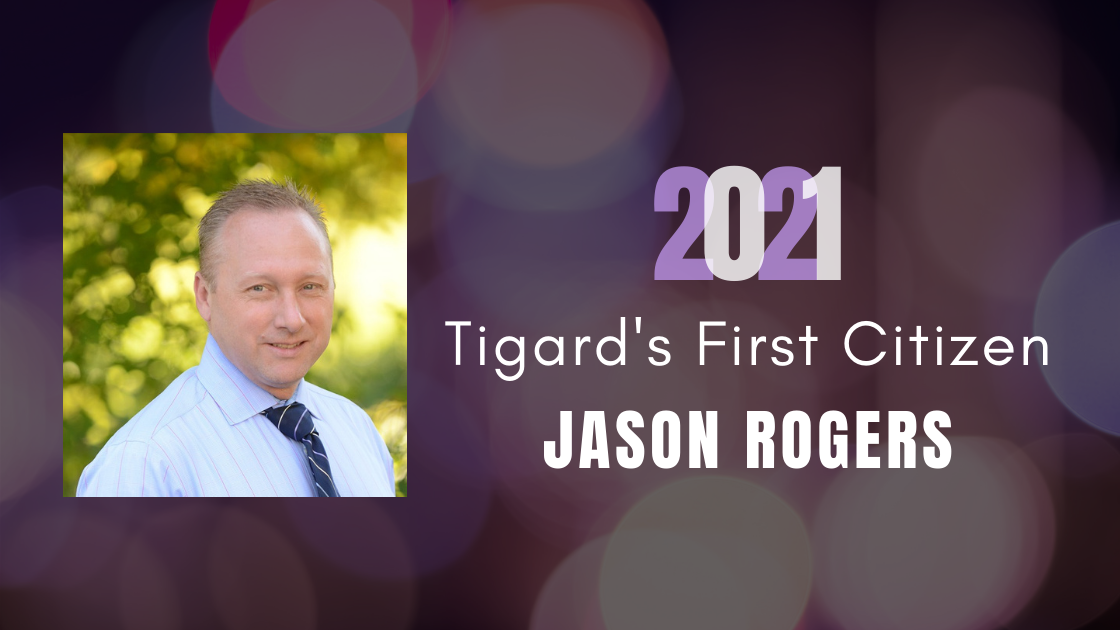 Jason Rogers has been named as the 2021 recipient of the Tigard’s First Citizen award.   This award recognizes someone who has made in-depth, long-term volunteer contributions to the Tigard community over the years. The winner is active, involved, interested and enthusiastic about making Tigard a nice place to live and work. This individual excels in any area of unpaid endeavor of education, social services, youth work, and community improvement of public services. This award is given in the spirit of all volunteers who remain unknown. The recipient joins the ranks of those previously honored in continually striving to improve the Tigard Area.

Jason Rogers has been making an impact in the Tigard community for more than 19 years! His volunteer resume begins back in 2002 when he was the EMS representative for the Behavioral Health subcommittee for the Vision Action Network – Washington County.

He later served as the President of the Summerlake Homeowners Association where he worked to improve the by connecting neighbors through annual picnics and events, neighborhood hanging flower baskets and wreaths and by revamping the neighborhood newsletter.

Jason began volunteering for the City of Tigard 1999 by adopting a local trail near his home in Tigard.  Soon after, Jason went on to join the Parks and Recreation Board and was appointed Chair. The Park and Recreation Board advises Public Works and City Council about park and recreation policies, the parks budget, facilities and other needs related to parks and recreation in Tigard. Some of the things Jason assisted with during his time on the board was revisioning of Tigard’s Parks System Master Plan and led two bond measures resulting in Tigard voters approving a $17 million parks bond. He also assisted with the acquisition of the Summer Creek Park, Potso Dog Park, and the Sunrise property.

In January of 2011, he was appointed Tigard Planning Commissioner by City Council and the Mayor and was President of the commission. As a Planning Commissioner, Jason advised the City Council on general land use and transportation planning issues, reviewed development projects and development code provisions delegated to the commission and acted as a hearings body for certain land use applications and land use appeals. He also assisted City Council to develop, maintain, update, and implement the city Comprehensive Plan and Tigard’s Capital Improvements Program, and Urban Forestry Plan.

Jason then transitioned his volunteer efforts to a county level. He was an EMS representative on the Suicide Prevention Council and later joined the Park and Recreation Board for Washington County.

Jason has also been an active volunteer for the Boy Scouts of America since 2007. He is currently Assistant Scoutmaster for Troop 874. From May of 2018 to July of 2020, he served as the District Chairman for the Tuality District of the Boy Scouts of America. In this role, he led the districts executive board, secured support from top community leaders, appointed a district nominating committee, planned and presided at district committee meetings, recruited the operating committee chairs, communicated between the council and district and coordinate the work of the district to ensure the success of the units in the district to improve in Journey to Excellence.

And if that is not enough, Jason is also a current member of The American Legion.

As you can see, Jason has a high level of commitment to the betterment of Tigard for the community. His engagements with Tigard range from his local neighborhood to Washington County. You can also see his commitment to youth with his roles with the Boy Scouts on a local and district level.

Please join us in congratulating Jason on his award and thanking him for his service to our Tigard community.  His award will be formally presented with other Tigard volunteer and business awards at Tigard’s 2021 Shining Stars Community Awards Gala, held on Friday, April 30 from 7-9 p.m. virtually on the Tigard Chamber Facebook page and YouTube channel. Join in on the celebration by pre-ordering dinner from De Angelo’s Catering, get dressed up and join the conversation online while enjoying the award ceremony from the comfort of your home.

We use cookies on our website to give you the most relevant experience by remembering your preferences and repeat visits. By clicking “Accept”, you consent to the use of ALL the cookies.
Cookie settingsACCEPT
Manage consent

This website uses cookies to improve your experience while you navigate through the website. Out of these, the cookies that are categorized as necessary are stored on your browser as they are essential for the working of basic functionalities of the website. We also use third-party cookies that help us analyze and understand how you use this website. These cookies will be stored in your browser only with your consent. You also have the option to opt-out of these cookies. But opting out of some of these cookies may affect your browsing experience.
Necessary Always Enabled

Performance cookies are used to understand and analyze the key performance indexes of the website which helps in delivering a better user experience for the visitors.

Analytical cookies are used to understand how visitors interact with the website. These cookies help provide information on metrics the number of visitors, bounce rate, traffic source, etc.

Advertisement cookies are used to provide visitors with relevant ads and marketing campaigns. These cookies track visitors across websites and collect information to provide customized ads.

Other uncategorized cookies are those that are being analyzed and have not been classified into a category as yet.